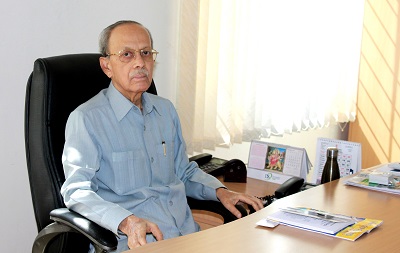 It was the initiative of Dr. Girendra Pal, to establish a full blown education system of Homoeopathy in 1965. He was joined by Dr.R.P.Mathur, Shri P.L.Banerjee, to start a small batch of training in Homoeopathy on 01-09-1965. Dr. R. P. Mathur was designated as the first Principal of this college. The financial foundation of this dream was a token contribution of Rs.100/- each by the pioneer group of three to which added the fee charged from the students. The first affiliation was sought from U. P. Board of Homoeopathy, Lucknow for B. M.S. Diploma.

In 1969, Rajasthan Homoeopathy act came into existence and Rajasthan homoeopathic medicine board was formed which granted affiliation for D.H.M.S. Diploma course in 1977 and for B.H.M.S. degree course in 1983.In 1986-87, University of Rajasthan granted affiliation for B.H.M.S Degree course and for the post graduate course i.e. M.D. (Hom) in 1991-92. During this process a very cohesive team of Dr.R.P.mathur, Shri R.C.Ghiya, Dr.M.P. Khunteta, Dr.Girendra Pal, Dr.K.C.Bhinda, Dr.J.D.Daryan, Dr.Ashok Sharma and Dr.S.K.Godika developed to provide a permanent nest of its own to the college in 1979 constructed on a piece of land donated by. Dr. M. P. Khunteta in 1976. The college with an affiliation of Rajasthan University in Year 1990-91 became the first one in India to impart homoeopathic education at Post-graduate level. Rajasthan University had the privilege of awarding first M.D. in Homoeopathy in the country.

Presently the college is running in its own three level building. College building is erected on a land size of 54,960 Sq.ft in the heart of Jaipur city very close to Railway and Bus Stations. It`s a huge building with a constructed area of around 60000 Sq ft. composed of well developed various departments of different medical streams. Every department of college is having adequate space, arrangements for sufficient light and air, required equipments, computers and software, display charts and articles along with individual library in each department. Central library of college is a rich source of books in Homeopathic and allied subject along with regular subscription of many national and international journals.

This institution, which was started in 1965 with a small budget and space over the period of 45 years, reached to a level to establish its own University, will now be recognized on Global level in the field of Homoeopathic education and research. The credit goes to dedicated efforts of the Management Board, Secretary Dr.Girendra Pal, faculty members, students and all the well wishers of Homoeopathy.

The facility of advanced education in Homoeopathy will bring teachers and research scholars under one roof which will help in the upliftment of Homoeopathic education and research all over the world and will prove to be a boon for knowledge seeking students.